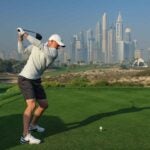 Rory McIlroy hits a tee shot on the 8th hole at the Emirates Golf Club during a practice round for the Dubai Desert Classic.

Rory McIlroy, in a video put out this week by the DP World Tour, hit his tee shot on the scenic 8th at the Emirates Golf Club, and the hole is maybe as good as any to illustrate a move that he says has “helped me a lot over the last few months.” While the 8th tee box mostly guides you in the right direction, the shot has to carry desert, and you could also choose to chew off more — or less — of the sand.

“You know, and a lot of courses on Tour and stuff, you have to do that — they try and play tricks with you and have the tee box aimed at different angles,” McIlroy said in a recently released video by the instruction site Me and My Golf. There, too, McIlroy was standing on a tee box that was pointing him one way, when he wanted to go another.

So what’s a golfer to do? In McIlroy’s case, he outwits the tricks.

On the video — which you should watch in full below — he was asked about his pre-shot routine. But for the first two or so minutes, he dished only on his use of an intermediate target.

“Yeah, so I think the one thing that’s helped me a lot over the last few months is especially like, even you have like say this tee box — it’s not aiming you exactly down the middle of the fairway, right?” McIlroy said on the video. “It’s aiming you over to the right and you’re having to aim across it, so I’ve been using an intermediate target pretty much every shot, especially tee shots.

How far away is the intermediate target?

“So if I’m going at the pin there, like I’m much better at aiming at a target that’s 4 feet in front of me, instead of trying to aim at something that’s 300 yards away,” he said on the video. “… I’ll try to pick a little spec of, you know if I’m trying to hit a pretty neutral shot, a little spec of sand up there and I just try to, you know, I aim my clubface at it, and then I just try to get my body parallel to that. And I know then that even if a tee shot feels uncomfortable, you know you’re aiming in the right spot. …

“I feel like it’s always awkward aiming across the tee box, for some reason; I always feel like I’m aiming way too far left. It just — that’s how it feels to me. But then if you just use that intermediate target and trust that, then at least you know you’re aiming properly. And like you guys know, like, you’ve basically won half the battle if you’re standing correctly. And then from there, you know, it just makes the rest of it just a little bit easier.”

Have golfers played with intermediate targets before? Yes, of course. And McIlroy became even more convinced of their benefits when he watched a video of the 1975 Masters.

“There’s a great video of Jack Nicklaus — I think it’s like the 1975 Masters — and it’s his second shot into 15 on the last day. And he used an intermediate spot quite a lot. So he would, all he did was, was focused on the intermediate spot. And then he looked at that, he’d look at the target, look back at the spot, look at the ball — target, spot, ball — and then it’s just really, really cool to see. Like arguably the best player ever using that such a simple technique to make sure that he’s aiming the right way.”

Back to the pre-shot routine. At this point in the video, Me and My Golf hosts Piers Ward and Andy Proudman circled back and asked McIlroy where the intermediate target selection fits into his process.

“Yeah, so I’ve done my visualization first,” he said. “So again, if it was a pretty neutral shot I wanted to play, I’d try to visualize that shot, you know, go pick my intermediate spot and then just try to let the swing sort of respond to that picture that I’m seeing. I think it’s just about the more visual you can be and the more you can even see yourself, like even if you’re behind the ball, see yourself in there hitting that shot.

“That gives you so much confidence to stand up and say, OK, well, you know, I’ve seen it and I can, you know, try to do it.”

GOLF's Subpar: Why Rich Beem disagrees with Brandel Chamblee about getting to know players